Let’s talk about Christmas for a few minutes. I love Christmas. I mean I really LOVE Christmas. I think many people can relate… lights, traditions, cookies, decorating, songs, ornaments, presents, the whole nine. It’s the most wonderful time of the year, right?

Jon and I got to have 4 Christmases. One dating and the rest married. And over those brief seasons, we’d already established some family traditions and plans for Advent. New Christmas pjs. Coffee and cinnamon rolls on Christmas morning. Opening one present on Christmas Eve. Reading Luke 2. Christmas cards to each other–that one was new to me! But one of Jon’s quirks was that he loved giving and receiving cards.

Incidentally, as we drove to our honeymoon cruise ship, I had to read each wedding card aloud to him! I admit, I was more interested in seeing the money or gift cards fall out. But I digress.

When it came to decorating our tree, I adored unwrapping each ornament and reliving the memory associated with it. A clay bride and groom. A little gold airplane from the National Air and Space Museum. Blown glass from Tennessee. A seashell from the Bahamas. A beluga whale from the Georgia Aquarium. A wooden owl from Galena. Our Christmas tree represented the fulness of life together. 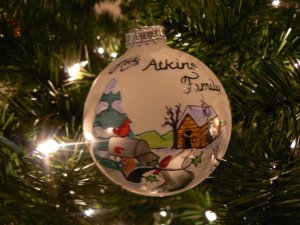 Every year we rode the train into Chicago for Garrett’s popcorn, window displays on Michigan Avenue, lights, and the Cheesecake Factory (one piece to split–for the train home, of course) But my favorite part of our day was Christkindlmarket, a traditional German market set up in the heart of downtown.

First on the agenda, find an ornament. I guess that’s obvious, I suppose. Mission accomplished–hand painted, delicate, snowy scene on a glass teardrop. We loved milling through the booths hand-in-hand, sampling German food and admiring the hand-carved nativity sets, of which we planned to start our own this year. The idea was to buy Mary, Joseph and Jesus this Christmas and to add another figure each year. Another of the simple pleasures was mulled cider or hot chocolate in a boot. There’s something about a steaming beverage inside a ceramic boot that is pure delight.

And in all of our celebrating, we wanted to exalt Jesus. We desired to walk through the Christmas season with expectancy, rejoicing in Christ’s first Advent and joyfully anticipating His second! Jon led me well in enjoying the good things of Christmas, but focusing on the ultimate thing.

But, this year as “The holidays” approach I had some deciding to do. Should I run from them? Should I expect that they will always be hard and that’s just the way it is? Should I live November through January with a sense of miserable dread?

Several things could lead me there. Christmas symbolizes the final normal. It’s the last event in my memories of Jon not marred by illness or death. For his first trip to the ER was December 28th. Christmas seems like it will predicate memories of “the lasts”–the last month of Jon’s earthly life, our last date, the last dinner I cooked for him, the last movies we watched together (Ironically they were Steel Magnolias and P.S. I Love You. When he died shortly thereafter, those movies felt like a sick joke).

I can vividly picture many more lasts. Approaching Christmas also means I’m coming to the “last of the firsts.” You know, my first birthday without him, first Thanksgiving, first Christmas, first New Year’s and then we’ll be to the year anniversary of his death.

So, yeah there’s been a lot to consider.

Well, several weeks ago I heard someone say. “The holidays are always just so difficult for me. I just dread them because of the memories. Because of the loss.” I was moved with sorrow for this person and for myself.

But then I thought, “Ami you have a choice.” I can choose to run from the hard things, or I can choose to face them head-on as I have faced every other facet of grief. Some things will be challenging this Christmas season, but so will grace continue to be magnificent. I’m sure there will be tears, but there will also be overwhelming joy.

So, I choose to live. The tree is going up. Music is being played. Cookies are being baked. My heart is ridiculously excited! I’m in awe of God and all He’s doing. Grace is abundant. Some beautiful things are happening. Not deserved, only grace.

A lovely idea still taking shape is the desire to intertwine old memories with new. Perhaps the Chicago trip will have to include Hannah’s Bretzels. What in the world is a bretzel? I have no idea, but I hear they’re kind of amazing.

So with the choice before me, I remembered that Christmas isn’t really about me or Jon anyway. To be trapped, wallowing in misery during this season is to completely miss the point.

But here’s what is. God became man and dwelt among us. Jesus so thoroughly obeyed the will of the Father that He was willing to take on all the weaknesses and infirmities of human flesh. Still fully God, but also fully man. What a great mystery! Yet He became the very nature of a servant and obeyed even to the point of death.

Expect Jesus. That’s the reality of Christmas. My pastor said that. And one day he might sue me for plagiarism because I’ve probably stolen lots of his ideas. Nonetheless, expect Jesus in life right now. Expect His transforming work of grace. And expect Him to come again. As the Jews so longed for Messiah, so we long for Him to return!

Thinking on Jesus increases joy. My pastor said that too. But really, I think Isaiah said it first.

The people who walked in darkness have seen a great light; those who dwelt in a land of darkness, on them has the light shined. You have multiplied the nation; you have increased its joy…” (Isaiah 9)

And as Isaiah thought on the coming Messiah, his joy overflowed.

And he would be the Son of God.

He would be Wonderful.

He would bring a kingdom that would never end.

And listen to this from Luke 1. “Because of the tender mercy of our God, whereby the sunrise shall visit from on high to give light to those who sit in darkness and in the shadow of death to guide our feet into the way of peace.”

How then could I live in misery?

Jesus is light. Jesus is peace. Jesus is complete satisfaction.

And Jesus is JOY. 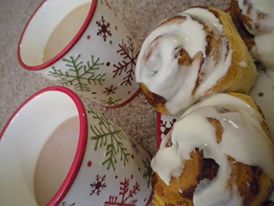 14 thoughts on “Christmas, joy or misery?”